UK film mag Little White Lies has had another creative brief running, this time to do with Nicholas Winding Refns' new film Only God Forgives. As if the prizes didn't make the competition alluring enough, Refn himself is actually judging the competition entrees, so I thought I best get involved! I started on the poster 5 days ago, but only had precious little time each evening from 6 til 10ish to work on it, so it was definitely an exercise in working to a deadline. Without having seen the film (out today) it's hard to know how well I've captured the film (if at all) and there were a hundred different layers and colours I continue to tweak and mess about with to slightly change the look of the poster, but this is it as of the competition deadline today. That and the alternate version. 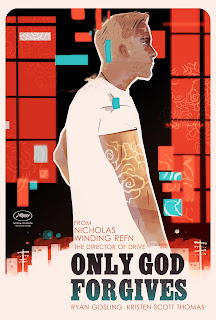 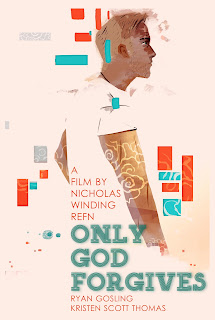 The idea and design basically came from noticing Ryan Goslings simple wardrobe throughout most of the films trailer. Much of the time there (and in Drive) he wears a well fitting plain t shirt. I figured if he was a superhero, that would be his iconic super hero costume. With the t shirt switching between black and white, immediately I thought of the negative space it could create, as the more colourful neon lights the film is basked in surrounds him.
Posted by Markus Motum at 11:42 No comments: